At Wesgrow we supply 15 greenhouses and then we have a 16th greenhouse that is used for the preparation of the mini-tubers for planting.

We get in our plantlets from the breeders in Netherlands and Scotland, and we then send them through to the relevant facilities. We have a quarantine facility, a gene-bank facility and a commission facility.

New plants from the breeders will first go to the quarantine facility. The first cart completed by us will then be sent to the National Department of Agriculture for the exotic disease test. When they are released from there they will be sent to the plant Devita which is also part of the Potato Certification Services for the testing of viruses and bacterias, and from there the plants will go to our Commissions. 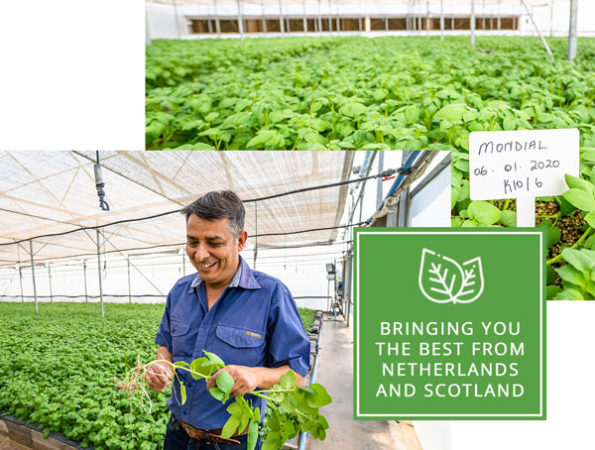 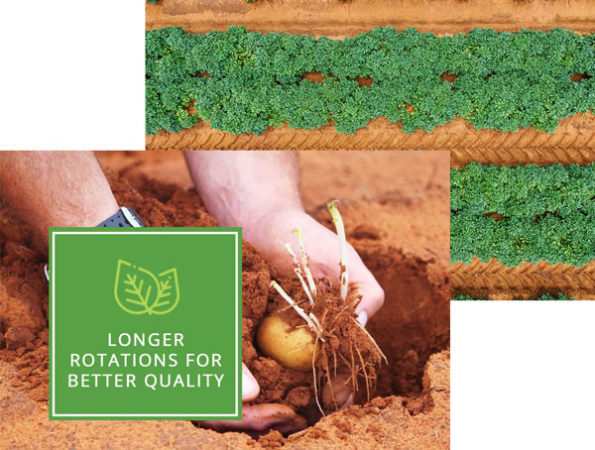 So as a business we don’t just look at producing the best quality seed but we also put great consideration into longevity and how sustainable it will be for the next 50 years. We look at how we as a business will be able to grow on our current soil not only for the next 10 years but way beyond that.

We import the genetic material from the breeders in Holland and Scotland in order to produce disease-free generation zero potato seeds which is the beginning of the whole potato industry. We work with both an Irish and a Dutch Company to whom Rascal and Wesgrow have exclusive rights to their varieties

The production of our potatoes takes place in two stages, first in the laboratory where we clone plants under sterile conditions and then second in the greenhouses where we transplant the plantlets so that they can grow into mini-tubers that are 100% free of any diseases, producing potatoes that the farmers can actually plant in the fields.

Our potatoes get multiplied 4 or 5 times in the fields before they land on your plate or in Simba packet of chips. We produce around 70% of South Africa’s genetic generation zero mini-tubers.

There are many varieties that we test, and this usually costs a lot of money. Most of the varieties that we test usually get cancelled within 3 years time due to not making it commercially, not working in the environment, it being too susceptible to diseases, yields not being good enough or the quality not being up to standard because it’s bred in Holland and in Scotland. We do however look for varieties that they breed for the Mediterranean market because that is the closest to South Africa’s conditions, but even those varieties do sometimes not work here. Of the almost 10 new varieties we import every year, usually only one of them is a winner.

From us, it then goes to the best seed growers in the country, 90% of them being in this area. They then plant the mini-tubers in Tosca, along the Botswana border which is a disease-free area, where it gets multiplied once or twice and then comes back to this area as a generation 1 or 2. The guys here at Wesgrow then multiply it once or twice more.

The companies in Holland and Scotland are the best breeders in the world with over 2000 breeders whereas in South Africa we have only 1 breeder. Mondial is now an open variety, whereas we once had the rights for 25 years, Sifra is the second most popular variety that Wesgrow brought into the country, which we still own the rights for.

There are in total 7 mini-tuber production facilities, but only 3 labs, the other mini-tuber facilities buy their seeds from these labs.

In the potato production industry it is common to jump between differing prices due to demands or shortages and overproduction. At Wesgrow we decide on a fixed price in December regardless of outside factors and we stick to it for a year.

We have also changed the way that we sell seed in South Africa, we don’t just sell seed anymore, we sell plant-ready seed.

In the past, we sold seed to the farmers and we left it to them to decide when they will plant and how they will treat it etc. This left us in a situation where farmers would buy seeds without sufficient knowledge surrounding how and when to plant it, which would lead to rotting seed. We then decided to take over more responsibility from our side in order to give our customers plant-ready seeds. We make sure that their seed is ready on time for when they need it.

In the past, there used to be two seasons in South Africa, basically two six-month seasons, but this caused difficulty because when seeds were 6 months old, the older part was too old and the younger part was too fresh, so we decided to start working in cycles of three seasons of four months. This enables us to sell optimal quality seed of 4 months old. We have growers across the country and with that, we ensure that we have seed available for 12 months of the year. We then also put guidelines in place for our customers in order to help them know when they should order if they want their seed to be ready by the time they want to plant. So we aid people in the process by telling them that if you want to plant in July, August or September that they need to order in February and March for example.

There are different regions where our producers plant all through the year, so it is very region-specific based on the inland frost and the extreme heat in the outer regions.

Our competitors do also sell plant ready seeds, but they, unfortunately, will not be able to deliver plant-ready seed constantly over a 12 month period to the market that they’ve got, and that is what we have aimed to achieve, to deliver to our market constantly over a 12 month period. March will always be the most difficult month to deliver seed and that is because of frost in the producing areas.

There have been instances where we have lost 25% of our stock because of unexpected natural instances, but because of our scale we were easily able to make up for lost produce and at the same time continue delivering only the best quality to our customers, whereas smaller industries would not be able to provide in such a situation.

Individual farmers would usually resolve to selling their produce as uncertified and at cheaper costs if their potatoes were to fall victim to disease, meaning that quality was not guaranteed.

At our company about 15 years ago we decided that we will only be dealing in certified seed, because of our integrity we will never sell any product to our customers that are not certified. That is why we can confidently say that what we put in the bag is what our customers will be receiving. We also put strict systems in place for our producers so that they will constantly provide us with good quality seeds.

Part of our strength is that we plant on over 10 000 hectares in South Africa of which about 6.5 hectares is Wesgrow. There are 22 shareholders in Wesgrow, but we also make use of contract grounds which are non-shareholders. The season one part of our process is the non-shareholding part, it is outsourced into contract ground, and then season 2 and season 3 of our process is the shareholding part.